Moving away from all of the people and things you knew and loved is a hard time spiritually. Of course there are compensations, especially when he is a lovely grandson who smiles and laughs a lot!  But having just had my anniversary of becoming a Reader I miss writing sermons and the people who hopefully appreciated them.  I am reminded of one I wrote as an assignment and never got to preach, and it reminds me of the true nature of worship at a time that is challenging ….. 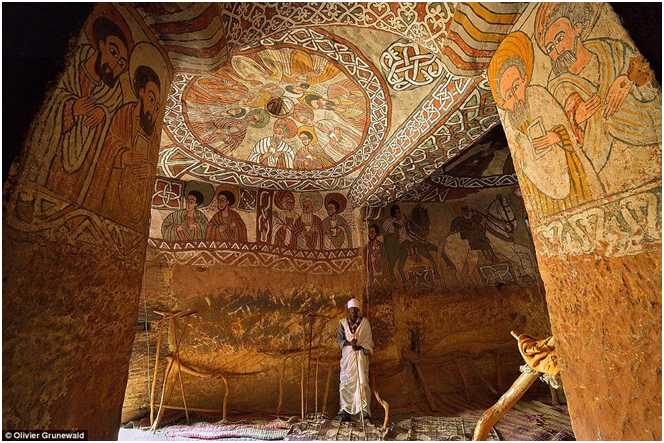 This church in Ethiopia is said to have been carved out by an Egyptian priest, Father Yemata, who walked all the way there in the 5th century. The walls were later painted with frescoes.

Father Yemata’s journey established a church which the congregation can now only reach by scaling a 19ft-high rock wall without ropes or harnesses. Anyone wanting to pay a visit must also make their way along narrow ledges and cross a rickety makeshift bridge.

In our story, Hannah and her family had only five or so miles to go to reach the place of worship that was recognised for all Israel at that time, and that was Shiloh.  Not far on the bus, but her family would make the journey on foot.  It would be quite an entourage with all of the children in tow, this was a cause for celebration, there would be feasting and drinking as part of this once a year trip to see God in his temple.  A bit like your journey to church this morning before your Sunday roast! Well maybe not quite the same.

But none of those children were Hannah’s and worse still Penninah had that self-satisfied grin that Hannah would dearly love to wipe off her smug little face .  They were all her husband’s and Penninah’s.  And Elkahan was very happy with himself, after all he had produced what he needed to continue his family name and do not underestimate how important that was.  So why wasn’t Hannah happy for him, why was she not happy full stop?  Why was wasn’t Elkanah, as he told her, like more than ten sons to her?

I can’t answer these questions. Elkanah wasn’t listening, and if you don’t listen then your wives will take the initiative and you may be left, as Elkanah was, wondering what whirlwind had hit him. This is a story about a remarkable woman, even though, as the Bible tells us ‘there was a certain man,’ he seems to be the co-star in this drama with Hannah up for the Oscar nomination.

So here we are in this ménage à trois, not uncommon, not forbidden in any way at this time within the culture – Abraham did just the same kind of thing when Sarah could not conceive, it was a good way of making sure you hedged your bets, and we do like to hedge our bets when it comes to God’s provision sometimes.  In modern day terms what Hannah suffered was abuse in a rather strange and unnatural way.  Not from her husband who loved her more than her rival, but from Penninah.  She was jealous of Hannah’s special favours from her husband, so she taunted Hannah because she could.  Hannah was far from happy with second best – she desperately wanted her own child.

There was no IVF in those days, but I am sure desperate and distressed Hannah would have trooped Elkanah down to the Doctors if there had been.  She was that kind of a woman.

What is this? Do we not trust God to provide for us? To solve our problems? To give us what we need?  Some might say that is wrong, not trusting God like Hannah did in this story.  But Hannah had no choice.

I knew of someone  who was trying to start a family and had had a number of failed IVFs.  His boss did not know any of this until the situation had become critical and he was needed as a character witness for a court case.  The pressure of work and torment had reached critical.  The boss wanted to do all he could to help, so he prayed as well as giving him a testimonial. Both seemed to have worked!  They then decided to adopt, but shortly afterwards, like Hannah, his wife became pregnant and they had a lovely little boy. But  if you are in a similar situation let us not put a spin on this and feel guilty about not praying and trusting God.  On a more trivial scale I once heard a preacher say that he had had a bad headache before he came to preach so he rebuked the devil and took two paracetamol!

I am very conscious that there will be people here who, like Hannah, may be struggling with all kinds of bitterness for one reason or another.  It eats into you, it robs you of any happiness, and the people around you never understand, indeed, like Elkanah, they can be positively hurtful. By all means have compassion for the childless, the unmarried, the divorced, the suddenly bereaved, the alienated, the abused, the refugee, the lost and broken.  But let us not say we understand their hurt.  But God has not abandoned you and neither should we.  God welcomes you without conditions, and so should each of us, without gossip, judgment, trite and hurtful remarks .  Having said that, like Hannah, your hurt is where your strength is, and turning to him for help provides not a crutch to lean on, but a solid rock on which to hone and sharpen your inner being.

Let us us return to the story, a story of hope. Hope is the only true companion with Hannah on her journey.

Things had been bad for a long time now and Hannah had had enough.  Did she get sloshed before she went to the temple and then lie to Eli?  So often we would rather make judgements on what we see, just as Eli did, rather than on what is in someone’s heart, like God does.  And the one thing we can be sure about, God knew what was in Hannah’s heart.  He knew about the distress, the bitterness, the ongoing disappointment, and finally this steely determination to bring her cause to the place and the one where she could have some hope  and put her trust firmly on the line.  What mattered here was her prayer, a heartfelt, heart wrenching, desperate prayer, backed up by a real vow she meant to keep to loan her child back to God to serve him.

Of course we don’t know everything about Hannah except she had a determination that stepped outside the conventions and culture of her time – the vow she made had to be ratified by her husband, but despite all his failings he loved her dearly and accepted what she had decided even though he was supposed to make the decisions by the conventions of the day.  Like all good wives – she just told him how it was going to be!

I somehow sense that if the roles had been reversed then Hannah would have been empathetic towards Peninah. I think that her husband, Elkanah, loved her so much more, not for any superficial beauty, but for her beauty within.  But that love was not enough.  This year something changed in Hannah.  There was a fever to her prayer like an infection that finally surfaced as a heart wrenching vow.

This was no bargain with God. This was all out dedication. She accepted that to worship God was not just a blessing but a commitment that she eagerly prayed for.  And with only the blessing from the high priest, her life was turned around by the kind of hope that is a certainty.  She knew by faith that something good was about to happen. She trusted it would and that trust did not fail to make God act out of his love.

Has God ever taken one of your desperate prayers and done something remarkable with it?  I hope you have not forgotten it if you did. Hannah had no idea that her son would become the one to anoint kings, and King David who foretold the coming of the line of Jesus, the King of Kings. Jesus would bring a new kingdom, a kingdom heralding heaven on earth for those who chose to receive the mercy and forgiveness and life change we need to live in the here and now. If you miss God’s blessing you soon forget what the blessing was and what you said you would do.  I will be honest – I don’t remember every blessing I should. 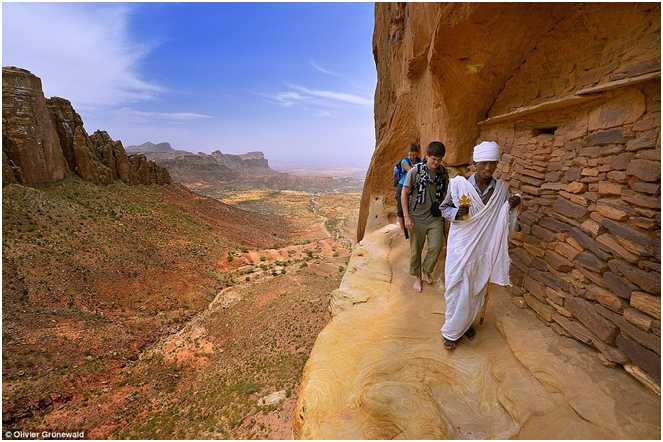 The truth is that often the most inaccessible places of worship are right here within us, within our hearts and our spirit. If we have the heart and spirit of Hannah then we will be able to truly worship in our own inaccessible temple.  This is the worship that gives birth to servants who hear what God will do, not necessarily for us, but through us.  When we pray to God and ask for his help, his gifts, should we not look beyond our own needs, to see how what God provides might be of help to someone else, to our neighbours, to our nation, to the world in which we live.

There is a line missing from the end of this story in most translations. It leads us into a beautiful prayer from Hannah.  After they left Samuel with Eli at the temple, what happened next? The  reading ends with “And she left him there,”  But in some original source texts and in the foot notes is has: “And she left him there and worshipped God”  All the bitterness in her heart had turned to worship.  God transforms us in many ways, but allowing worship to infiltrate our hearts and lives is one of the key pathways to joy.  It is a narrow pathway, steep sided and slippery at times, but where it takes you to is a place of worship.