I started working for the University of Liverpool in what was then called the Liverpool University Computer Laboratory (LUCL) in November 1977.  Before that I spent two years as a Research Associate with the Energy Centre at the University of Newcastle-upon-Tyne.  I graduated from here in Mathematics and I was taken on by Professor Bainbridge to develop a mathematical model of high pressure gas pipe networks for Northern Gas.  Here I learned to program in Fortran and APL with a bit of Algol  on the IBM 3270 mainframe.

At the Computer Laboratory I was an Experimental Officer working on the Faculty of Science student record system which was written in Cobol on the ICL 1906s.  I took this job over all of the others I was offered at the time partly because it was near my wife’s hometown of Wallasey and partly because I would still be able to write and run programs interactively rather than solely from punched cards.  If you could write a program that used less than 32k of memory you could run it online.  It was quite revolutionary at the time.  The rest of the University’s student administration system ran on a solely batch system and the big complaint was that the data was out of date and of poor quality.  The Faculty of Science under the then sub-dean Dr Harry Newns had all of the latest mod cons.  We had a mammoth machine with wired plug-in cards that read marks on the A-level punched cards from UCAS and produced additional punched holes to “mark sense” and “gang punch” the institutional decision .  These machines were manufactured by IBM.  Have a look at http://en.wikipedia.org/wiki/IBM_519 for more details and a photograph of the beast.

Later came a Dataterm optical mark reader which read “turnaround” documents produced on a line printer which the registration staff and students could make pencil marks which would then be read back into the system.  The pride of the Science Faculty was that registration and class lists could all be produced on the day after registration, a tradition that has been maintained by our development of on-line registration.

The Computer Laboratory was a different place back in the late 1970s and early 1980s and this is highlighted by some of the user notices, computer users forums and those superb melting pots of humanity called the staff meetings.

Hoarder that I am, I kept much of the paperwork from those early days of my career!

Here is a Computer Laboratory User Notice (CLUN 141) from November 1979, it shows the kind of equipment and limitations of the equipment in our data centres! 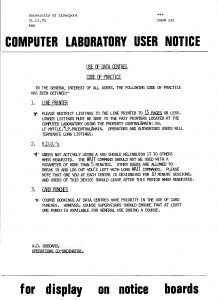 In those days the Computer Users Committee had to deal with equipment issues and here is an extract from the minutes of a meeting on 23rd January, 1978.

Staff meetings in those days, as well as covering the introduction of the latest technologies also dealt with many other matters!

Of course much more serious issues were discussed at staff meetings, for example the introduction of the New Vending Machine (which probably heralded the end of our tea lady Vera who made drinks and sandwiches for us in the common room).

At the time the Computer Laboratory used to produce regular newsletters that looked like this.

The Lab had a great pool of literary and artistic talent at the time and so, for Lab staff only there was another publication called The Alterative Newsletter which looked like this. 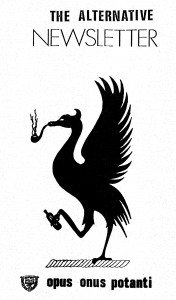 The motto on the front cover, Opus onus potanti, is I believe “Work: the curse of the drinking classes” – literally it is “Work Load Drink.”

This contained many things which if published now would need to be redacted heavily.  I’ll think about it – I’m sure a charity could benefit from its republication!  One of the features from those days that is illustrated was the ‘dress a director doll.’

Reorganisations were also a topic for this ‘rag.’ 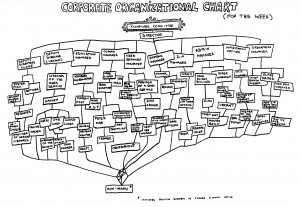 Such was the success of the Computer Laboratory in my area, not our normal field of scientific computing, that ultimately the Administrative Computer Unit based in Senate House was merged with the Laboratory and the new Computing Services Department came into being as part of a Centre for Computer Studies.   Computer Science was now also a part under a rather odd cycle of dysfunctional Directorships from each department so that it never fulfilled its original intention.  The majority of Computer Scientists sat on one side of the combined common room and discussed politics and the plight of the poor academic and the old Computer Laboratory staff sat on the other side and played cards and generally had fun.

Whatever else the Liverpool University Computing Laboratory may be famous for in those days there is only one important piece of research  that I discovered and that is its contribution to the sport of bowls and in particular to the manufacture of Drake’s Pride bowls.

“Research was carried out by Peter Clare as to the way forward and after careful consideration it was decided that investment into manufacture of composition bowls was required. So in 1981 Liverpool University Computer Laboratory was used as consultants on the project and they came up with a bowl profile. Based on this it was obvious that the way forward was to use computer controlled lathes to ensure accuracy of the profile rather than the traditional copy lathes or grinding processes. Thus the Drakes Pride bowls became the first to be produced on CNC lathes.”

This is an extract from an article on Darlington’s, Liverpool’s bowls business established in 1820: http://www.thesportofbowls.co.uk/drakes-pride/

But times have changed and as one of the now longer serving members of staff it is with some sadness that I leave.  Partly because of the happy memories, but also because those memories have also been tinged by some sadness at the passing of colleagues and friends.  Some of these have left us before their time.  There are others  who have tragically lost loved ones and we all shared their pain and grief.

Before and since becoming what was then the Head of Corporate Information Systems I have counted it a privilege and an honour to have been of some small help and consolation to those who have come to my office at times of difficulty in their work and lives.   More recently I have also have cause for many of you to listen to my own woes and I would like to thank you for all of your kindness and understanding.

So that is it.  It has not been the institution that has given me so many things to remember and ponder, but my colleagues and friends here.  It is always about people and how we can help each other to achieve the best we can.  Thank you all, it has been great working with you, sharing cups of coffee, sharing the gossip – maybe I should not have said that – and sharing each other’s lives.

I find it so appropriate that I am going out from the University in what was the Chapel of the old Royal Infirmary.  Here now, I have that “feeling,” that sense of all of the people who came here when it was the Chapel.  They would come here in great torment, distress and pain for themselves or for loved ones and they would pray.  There would be tears and some confessions, but also joy and thankfulness for those whose prayers were answered.  It is a strange sensation for me to remember that over the years, because I am a follower of Jesus, people also came to me occasionally and asked for prayer and in some cases more recently I have offered it.  The amazing thing is that, as far as I can tell, all of them have been answered.

Thank you all for coming (or reading this).  I hope it goes without saying that I may not miss the University when I leave, but I will miss all of you, the things we have achieved together as a team and the laughs we have had together.  I hope our paths will cross again, God bless you all.