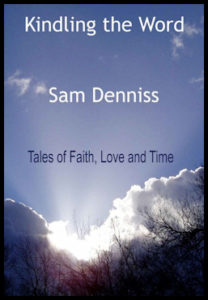 The library fire licked thirstily at the black soot lining the grate, sending shadows dancing across the tops of the books on the far wall. A mysterious awe surrounded spines as they stood upright like sentinels of all knowledge, wisdom and fantasy. I reached forward to switch off the flickering colours of the computer screen as they settled on a window onto a garish landscape painted by an unknown virtual artist. Something made me stop and instead I launched the browser again. My work was done for the day; the words poured out, splashed and layered like plaster on the wall of my novel. But instead of rubbing tired and weary eyes I googled down the main street of the town where I was born. Past where the newsagent and sweetshop had been, and just before the fish and chip shop that had outlasted the ravages of economic change. There stood the double bay fronted terraced building that had probably once been a house. Its stillness on the screen, the solid stone walls, the serene blue casements and solid door, now painted burgundy, and the brass plaque declaring its reason for existence beckoned to me from the past.I no longer needed the image on the screen as my mind rolled back over forty years and I was standing again on the cracked paving stones outside, hands in the pockets of my grey school trousers. I was feeling the rough serge of my blazer on my wrists; seeing the quartered arms of saints Cuthbert, Aidan, Chad and Bede reflected in the window. I fingered the still sharp edges of the blue cardboard tickets in my hands. Soon they would take on the curled softness of the green ones they now replaced. I was now an adult, as least as far as the library was concerned, and a new world lay before me as I walked through the open door. These were my passport, my passing from the things of childhood into places that only my parents ever ventured: the tall shelves of the adult library.As I passed by the central desk with its narrow wooden corridor and benign librarians watching over the silence and sanctity of their charges, I looked back at the one diminutive curved barricade that were the shelves of the children’s section and remembered. I fondly recalled the low shelves and comforting stories in brightly coloured covers that were my childhood and my initiation into another, alternative existence.Here were the things of wonder, the treasures of other places, other lands and, oh, what adventures. Here were the pictures, the colours and the flash of memories about a homing pigeon looking for home and wondering if there was a better place. Here I had lived the days with Jennings and Darbyshire at boarding school, played with the cats and dogs that lived at Rose Tree cottage just along from the lake where the bulrushes grew, and had gone on adventures with Swallows and Amazons, a Famous Five and an Adventurous Four. Here had been the gateway to lands afar, hunting gorillas in Africa, riding the silver Brumbies in the outback of Australia, and many other distant adventures of Ballantyne, Willard Price and Mary Elwyn Patchett. More than this, new worlds had opened to me as I sailed in space on Hugh Walters’ Mission to Mercury, followed by a Return to Mars with Captain W. E. Johns, read incidentally between equally marvellous and dangerous missions with Biggles and Algy. Amidst the extraterrestrial voyages were the wonders of Narnia and the dark places of Middle Earth. All these and the memories and the scents of ink and page had held me entranced. The giant atlas to be pulled down onto the table by the bay window filled with light from the grey road outside, open to display its wonder of green forest and brown contours of mountains, solid and awesome like a book of gods.

The glossy trails of knowledge from the non-fiction section, meticulously illustrated with black and white photographs of places and people and the colour plates of fantastical creatures escaping from another era and the jaws of Tyrannosaurus Rex. All these were a comfort now past.

Instead the tall shelves of the adult library beckoned. A universe of bound galaxies, warm and glowing in their cosmic dust jackets, filled with stars of ideas and nebulae of dreams, pricked with words to mould the gravity of minds, pulling at ethics and morals, teasing me with the innuendo of what happens next. Stories that were no longer safe, facts that shock or mislead: shelves of heinous crimes, distorted minds, uncontrolled passion and the fantasies of all humanity. The passing left a choice, a finding that not all endings are happy, and not all truths reliable. Instead the search for new wonders from the minds of Asimov whose robots displayed ethics to be proud of; Heinlein, whose time twists challenged my reality; and Sturgeon who questioned the fabric of my universe as I knew it. But this universe of books was so big without the maps and guides of Amazon and the internet, how was I to know which endings were 1984 or Brave New World and which Jane Eyre or Pride and Prejudice. Who could fathom the mind of Sherlock Holmes or the hunger for more that Conan Doyle generated in me. What was the meaning of a story that appeared as a children’s bedtime story, but ended as a satire in Animal Farm? How to recreate that first spasm of hilarity with Three Men in their Boat? Haunted by books of childhood past, lured by stories of adult present, dreaming of realities in future words.

The memories are real; each book had its own special identity, the musky scent of adventure, the clean aroma of distant lands, and the glossy smell of wisdom and knowledge. The blend of something that can be touched and turned combined with the heady drug of imagination. Here were places to be someone else, to recreate a life, to laugh, to cry, to lose all sense of place and time.

The passion to read became the passion to write and to start the cycle afresh, my imagination to yours, my words to your mind, my world to yours.

The fire had gone out in grate, but it still burned in the words of the pages of the books on the shelves that lined my study. And it still burns in me.