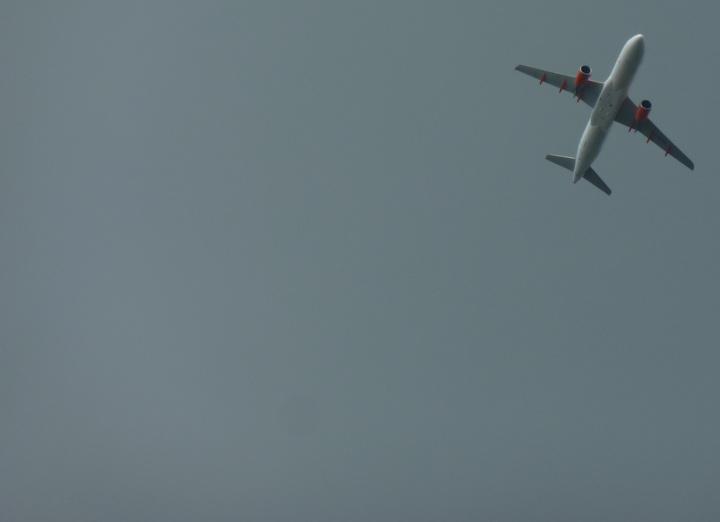 I wrote this after a work visit to San Francisco and it just came back to me today how relevant this flight of fantasy still is for me in its truth and reality …..

I’d been through the formalities of leaving the USA, they seemed quite glad to take away the green immigration card from my passport and bid me farewell. It was time to go home and I’d got a window seat as we taxied out onto the main runway of San Francisco airport.

I’ve not flown that many times, and maybe if you’re in that situation you can feel the same adrenalin surge at takeoff as I did.  If you haven’t, or takeoff is just like getting on the bus for you, then you’ll have to use your imagination here.  It’s that moment when the aeroplane sits back on its wheels like a great bird ready to leap airborne.  The engine pitch climbs to a roar, then suddenly the plane rushes forward gaining more and more momentum.  Part of me says that at the end of the runway is San Francisco bay and I can’t swim, another part says hundreds of planes take off from here without any problem, a very sane and inner part of me says God still has plans for me so there is absolutely no need to worry.

Well before the end of the runway the rattling sensation of being in contact with the earth stops and there is that wonderful sensation that birds must feel, of being airborne, of flying.  I’ll still give the hang-gliding lessons a miss though.

As the plane climbs steeply over San Francisco bay, the sun glinting off the water, there is a fascination in the regularity of the wave pattern.  Each wave hand sculpted, but precisely spaced.  There is a sense that the earth is not a clock wound up and left unattended by its maker until it runs down, but a living creation still full of life and breath.

It is easy to see how we have come to inhabit the earth.  As we bank and turn back over the land and head westward, still climbing all the time, the freeway is a river of boxes, flowing with the regularity of a line of busy worker ants.  Houses are more boxes discharging their contents onto the feeder roads for the journey to work.  Swimming pools flash like tiny mirrors in the sun.

By the time I reach thirty thousand feet, ponds are like pocket mirrors, streams silver strands joining them. Buildings are flat rectangles like on maps, and roads stretch from horizon to horizon.

Then I pass over the Rocky Mountains.  The contrast is awesome.  Stark black peaks each with their own sugar frosted coatings of snow sliding down into many fingered valleys.  The size and bleakness of creation unattended by humanity makes us smaller than the ants. The total absence of anything human made except the odd road or industrial complex laboriously clambering up the lower slopes.

Then, as I near the eastern coast of America, the great lakes.  Seeming seas in themselves, vast and blue….

“This is nothing says a voice inside.  Let me show you.”

Then as I watch the walls of the cabin grow transparent until they disappear.  Yet I still feel warm and safe, as though in a protective bubble.  But I am going up again, faster and faster – there is no longer any visible evidence that humanity exists.  There is the vastness of the Atlantic Ocean, brilliant blue, flecked with white clouds filling my vision.  There below is a swirling hurricane, spinning in slow motion at unimaginable speeds.  As my speed increases I am aware that the sky around me is getting darker and I look for the first star to appear, but the earth is too bright in the reflected glory of its sun.  Eventually the earth takes on the shape of a huge disk filling that darkness.  There is no fear, no sense of the pressing of gravity as I rush on upwards, only warmth and a sense of wonder.  Few eyes have seen this.

The earth is starting to grow smaller and it is time to feel afraid.  That is where I belong and it is rapidly going beyond reach.  I am still going faster and faster and soon the earth has shrunk to a still beautiful glowing marble.  As my speed increases another notch it shrinks to a tiny dot, until finally I can only focus on the place where I saw it last.  As the blazing sun comes into view in the corner of my eye I am shocked to see how small it has grown, how pale amidst the darkness of the heavens.  Then as if changing up another gear everything starts to accelerate at a speed I cannot even comprehend so that the sun fades quickly into the black velvet background of the sky.  I would not know how fast I was going now it if was not for the fact that I can see the stars moving – shrinking to a point where I last saw the solar system.

Suddenly when I have lost track of time and all sense of orientation other than fixed on that point I last saw ‘home’, I pop out of the galaxy and see, much like the whirling hurricane I saw on earth, the whirling arms of the galaxy suspended in blackness.  I can pick out individual stars at the edges, but the centre glows with a billion, billion suns.  I can no longer focus on home as a single star, but as a galaxy of more stars than I could ever count in a thousand lifetimes.

Speed and time mean nothing in any earthly or human measure and the galaxy grows rapidly smaller until I can no longer distinguish its arms, until it too fades to a dot and finally I cannot be sure where that dot was.

I am alone in a vast blackness – yet not alone, for one is beside me, the one who sustains my life in a place where I cannot possibly live.  No air, no water, no food, no family, and only the light from distant galaxies to satisfy any of my senses, which is no light at all.

Now God can speak to me without any distractions.

Then, from a point in the sky, I ‘feel’ home.  It is not a nice feeling – for from ‘home’ you feel all the sadness, all the sorrow, all the pain and injustice, all the sin and evil, all the distress of billions of souls pouring out from a single point in the sky, from ages past and eons to come. It lasted only a second – that was more than enough.

“It’s unbearable, how can anyone feel so much, Lord.  Is this what it is like to bear the price of our sin?”

“No, my child, that is why I brought you this far from your world.  Had you felt it any closer you would have died and been lost forever in madness.  I carry this burden and so much more for you at that one point in time on the cross of Calvary.”

“Because I love you.”