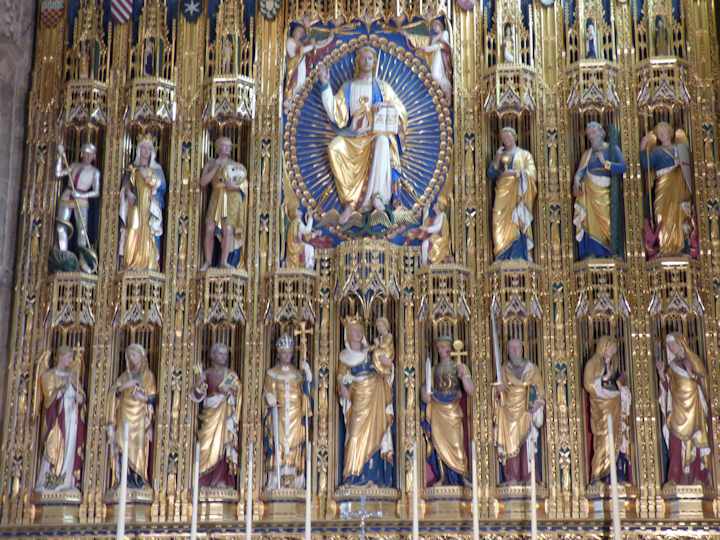 It may look in keeping with screens of the medieval period, but this is a modern addition from around 1900 and dedicated as a memorial to those who fell in the Great War, although it’s gilding was not finished until 1936. It is by the great Scottish architect Sir Ninian Comper, one of the last of the Gothic Revival architects, who also designed the Paschal Candle and statue of the Virgin Mary with Child to be seen in the north aisle of the Abbey. This screen is medieval inspired, showing biblical scenes of the Annunciation and the Visitation and the medieval guild saints. The central theme and figure of Jesus seated on the throne of heaven are from the book of Revelation, revealing the risen and ascended Christ as ruler and creator of the universe (the Pantocrator). Above him are the angels of the apocalypse, a canopy with the seven gifts of the spirit on scrolls with a central dove representing the Holy Spirit.

Go here for more about the screen.

Above on the canopy, mounted on the original stone corbels is the traditional crucifixion scene, with mother Mary to the left and St John to the right, with weeping angels either side. You will need good eyes to see, at the foot of the cross, a pelican. 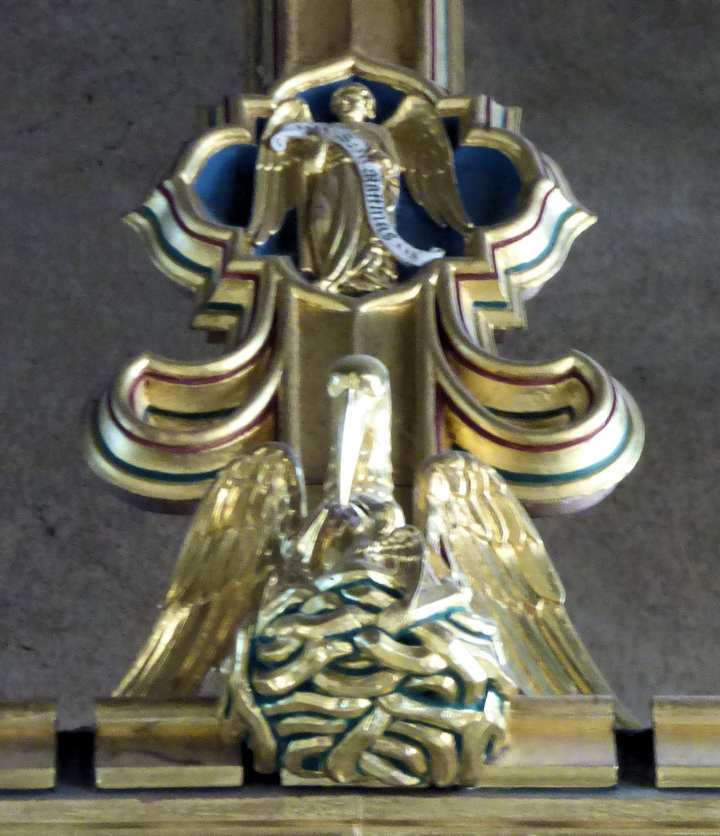 The significance of the pelican, which also features in Norwich Cathedral as a lectern instead of the traditional eagle, is to remind us of the sacrifice of Jesus, his blood shed for the forgiveness of all our wrongdoing. It was thought that in times of famine the mother pelican would peck her breast and feed her own blood to her offspring to give them life. It probably came from the redness of the pelican’s crop which increased during the mating season.

This is a good place to pause and reflect on God, and his son Jesus raised to heaven as our advocate, overcoming death after the ultimate sacrifice on the cross. As well as a judge seated on the throne, there is that great compassion, grace and mercy offered by Jesus to all who bow before him in faith, seeking forgiveness and a new life in all its fullness. It is before this screen and at this altar that the communion is celebrated, the pain of the cross leading on to the triumph of the ressurection a visual reminder of the last days of Jesus with his disciples now open to his new followers in the bread and the wine.