As you move away from the west door, step into the south aisle which also houses the Abbey shop. In front of the shop you will see stone footings embedded in the floor.

These are the original footings of the where the cloisters of the Abbey began. The south aisle was much narrower then and opened up into the rest of the Abbey all the way down to the River Tiffey, giving a sheltered southerly aspect to the gardens and fishery that lay beyond the ruins of the building which can be seen as hillocks of walls. A full archaeological investigation has never been carried out to establish the accuracy of some of the later drawings that were produced of their layout. We are certain of the Chapter House, however, as the door arch still stands among the ruins.

The south aisle was built after the dissolution of the monasteries by Henry VIII in 1538. As what remains today as the Abbey Church was the parish church and belonged to the people, stone was taken from the monastery to create the new wider south aisle with a new roof. From the outside you can see how the stonework is more higgledy-piggledy than the older parts reflecting this recycling of stone. The sergeant at arms John Flowerdew was appointed to sell off the monastic assets that were not destroyed, but he was known to be disreputable in his dealings with the people. C J Sansom’s book Tombland portrays him as such a scoundrel! 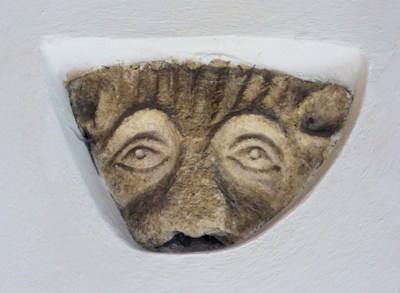 As you approach the new St Benedict’s look up, high on the wall there is a mask, a ‘grotesque,’ which I think looks like Simba from the Lion King! It is all that has been found of the original Anglo-Saxon church that once stood here.