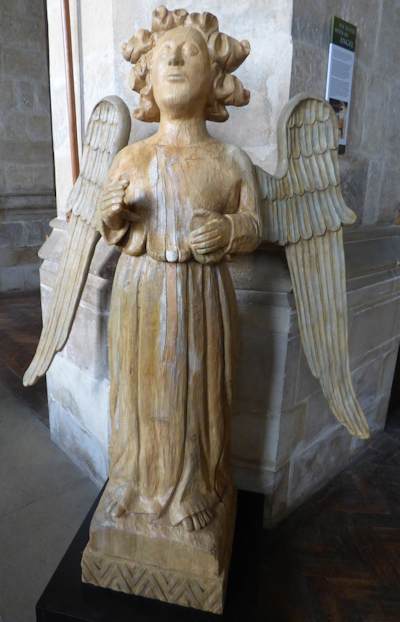 At the time of writing, the life-size exact replica of one of the wooden roof angels from the nave is in St Benedict’s. It used to stand by the font, which is why it is included here. If not, you may meet the angel elsewhere (including a real live angel which exist and people still bear witness to). Mediaeval Christians had developed a hierarchy of three ‘spheres’ of angels: 1) Seraphim, Cherubim and Thrones 2) Dominions or Lordships, Virtues of Stronghold, Powers or Authorities 3) Principalities or Rulers, Archangels, and Angels. Whilst most of these, or at least the expression, appear in the Bible, generally speaking angels appear to be large and fearful in the biblical records. Their first words are often “Do not be afraid!”

It may be that this life size angel, probably life size for the shorter population of the time, was considered to be a guardian angel, the lowest of the hierarchy as they stood watch over the congregation. Jesus mentioned angels in passing when teaching his disciples and summoned a little child to come to him. He urged us to become like children and in that child-like state he taught: ‘See that you do not despise one of these little ones. For I tell you that their angels in heaven always see the face of my Father in heaven.’ Matthew 18:10 (NIVUK)

The Organ and Bells