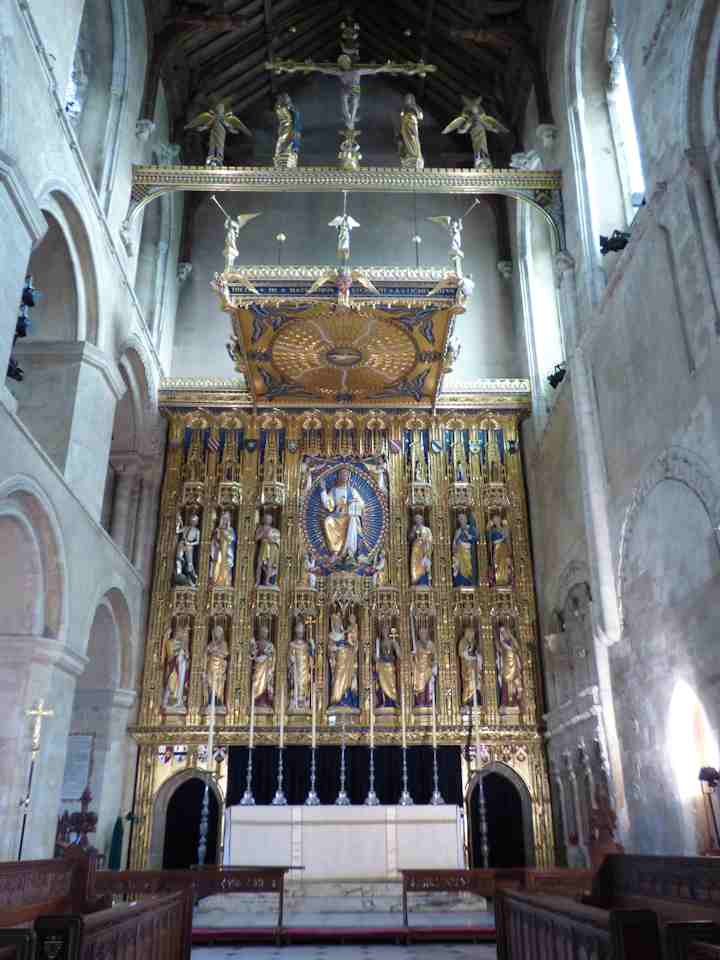 As a weekday visitor we usually enter through the west door below the 15th century tower – it is the best way to encounter the human attempt to give a sense of the majesty of God.  The normal Sunday entrance through the north door is less imposing, so if you are entering that way go straight to the main aisle or nave and look left! The reredos or screen at the front of the nave catches the eye immediately, but before we explore that closer up let your imagination take you back to pre-reformation times in the 15th century. On your right and left are the typical rounded Norman columns with Norman arches above almost all with different designs. If you reach out and touch these rounded columns you are connecting with the oldest standing parts of the Abbey. Here the voices of worshippers reverberated on the stone, hands of prayer and praise brushed this same stonework, and the Spirit of God dwelt within all who recognised him.

While you are still in the past let us change the perspective of what you can see around you – not the whitewashed walls. Instead a richness of colour and icons, Bible stories painted for those who could not read; a wealth of furnishing and, in the services, robed processions, the smell of incense, the ring of bells.  Our 10.30 am service still retains much of that as this is a High Anglican service.  Or you can attend the 9.15 contemporary communion if you prefer. But with the reformation all of that changed for the Abbey in 1538 and eventually some of the Norman columns were squared off, the walls were whitewashed and the statues removed. The stone altars were replaced by a simple wooden communion table that would be brought down to the centre of the nave so that access to God became the protestant good news of the gracious gift of salvation for all who repent and believe.

It is fairly certain that Martin Luther never intended his gospel of freely given grace, without the need for costly indulgences for the poor and those thought to be in purgatory, to extend to such mass destruction of medieval artworks. Here at the Abbey only two of these survive, one is the font on your left, though much abused. To see the other you need only look up to the heavens.